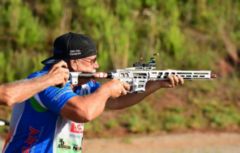 Steel Challenge matches challenge accuracy and speed.  Scoring is simple, your time is your score – however long it takes to hit 4 object an 1 stop time plate is your score, starting from and staying within a “shooting box”, shooters engage the targets once the start buzzer sounds with a few time penalties if you hit the stop plate before hitting the other plates, shooting from out of the shooting box.

Each stage consists of five targets, commonly referred to as plates. Four are standard plates, and the fifth is designated as the stop plate. Each of the standard targets must be hit at least once before hitting the stop plate, to avoid incurring penalties. Competitors may fire as many rounds as they deem necessary for each string of fire. The worst string on each stage will be thrown out, and the total of the remaining times will be competitor’s score for that stage. The best four out of five strings will be counted as the total score for each stage, except for Outer Limits, which will be the best three out of four runs.

The total of a competitor’s stage scores will be his score for the match. Total score for all stages will determine the order of finish for final standings.

Note: Only two of the three boxes will be used by each shooter. Depending on whether you are right or left-handed, you will begin in the appropriate outside box and finish in the middle box.

While the Centerfire must be drawn from the holster, the Rimfire divisions start from the “ready” position, with a construction cone usually being used to help point the muzzle in a safe consistent ready position.